Munich is the land of oom-pah-pah bands, spectacular Alpine views, lederhosen, and voluminous beer steins. This picturesque region of Bavaria is what most tourists think of when imagining Germany. It is also the home of Oktoberfest: two weeks of non-stop beer-drinking, sausage-eating, and merry-making at the world’s largest folk festival. Locals and tourists alike all dressed in traditional Bavarian costume take one back in time to the very first Oktoberfest – a community celebration in honor of Prince Ludwig’s marriage to Princess Therese von Sachsen-Hildburghausen in 1810. 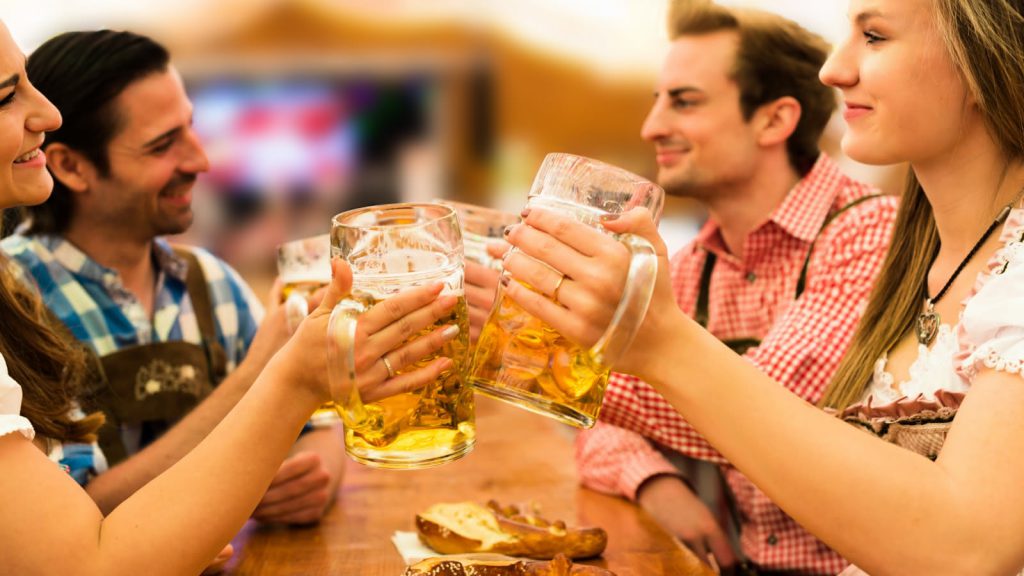 Oktoberfest runs from the second last Saturday in September, wrapping up on the first Sunday of October after German reunification day on October 5. The fest begins officially at noon when the mayor of Munich taps the first barrel at the Schottenhamel Tent, crying “O’zapft is” (It’s open). Although the festival ground is correctly known as “Theresienwiese”- named after the said Princess Therese – you will hear it referred to as “Festwiese” or simply Wies’n by the locals. 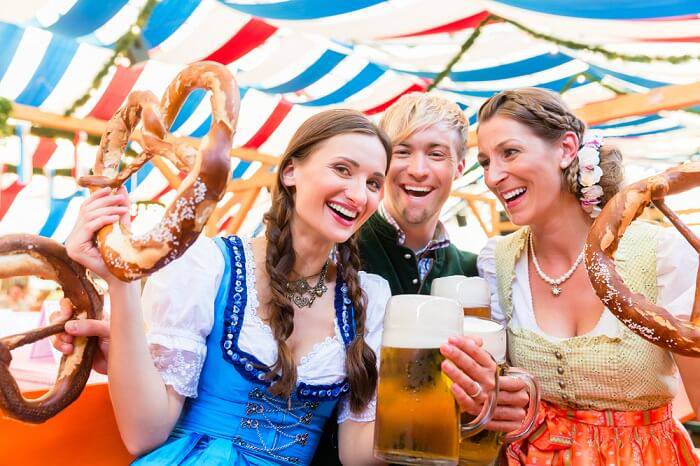 Oktoberfest is at heart a family event. Even “young children” are welcome in the beer tents amid the drinking, eating, cavorting, and singing, although children under six-years-old must leave the tents by 8pm. It is this long-standing tradition and family-friendly atmosphere that makes Oktoberfest so unique.

Entrance to the festival grounds and tents is free, but Oktoberfest is definitely not a low-budget event. Make sure you have a wad of Euros on hand: you will need it for everything as the tents don’t accept credit cards. Apart from eating, drinking, and tipping your server, there are carnival rides, attractions, and souvenirs to consider. 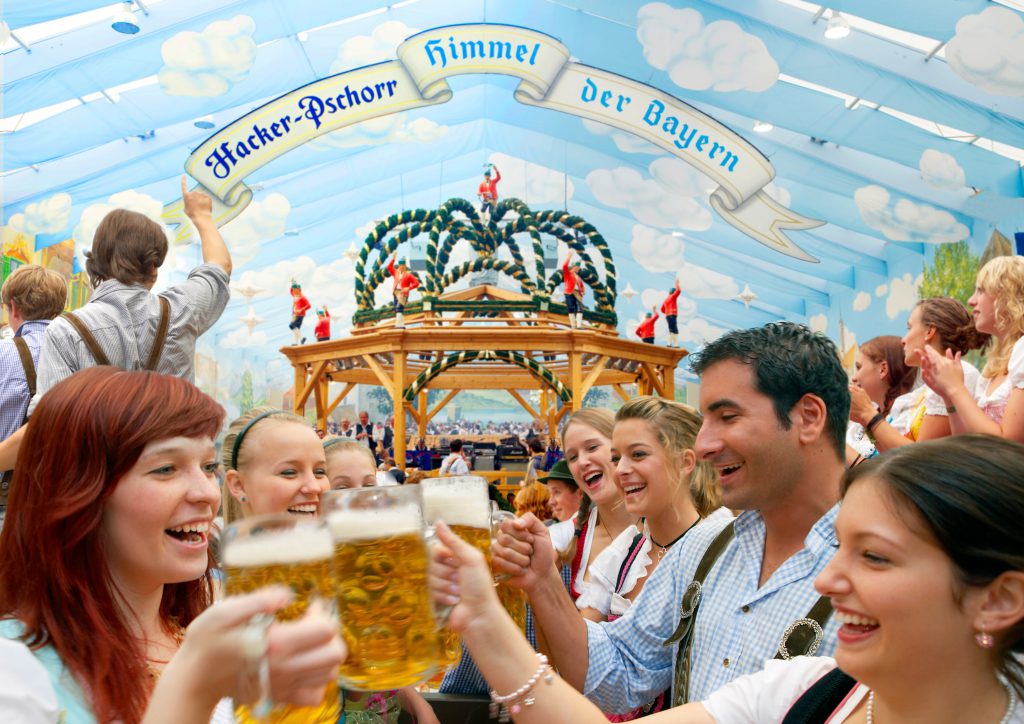 Oktoberfest draws around seven million merrymakers every year. Over the two weeks of the festival, visitors consume more than 6 million liters of Bavarian beer, making it the largest beer festival in the world. Germans still represent over 85% of attendees, but in recent years, more international travelers have been attracted to the festival and discovered this joyous celebration of Bavarian life. 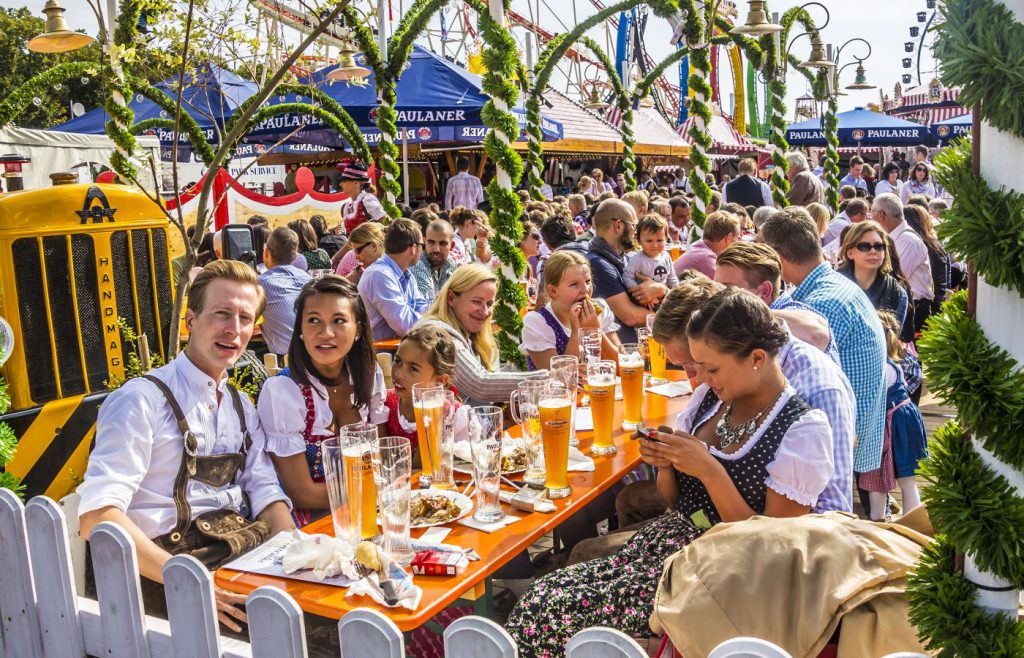 Inside the large decorated tents you will discover the traditional Oktoberfest you’ve come for: an abundance of hearty food, folk music, sociable crowds and copious steins of beer. There’s a mouthwatering feast to eat apart from Würstl (sausages); Wiesn-Hendl (grilled chicken), Schweinebraten (roast pork) and Steckerlfisch (grilled fish on a stick) are crowd favorites. The prime seats are those in the center of the tents and are mostly reserved up to a year in advance.  An experienced local guide can make all your reservations, transport you to the festival and escort you around, making sure you have access to the best seating, food, and beer. 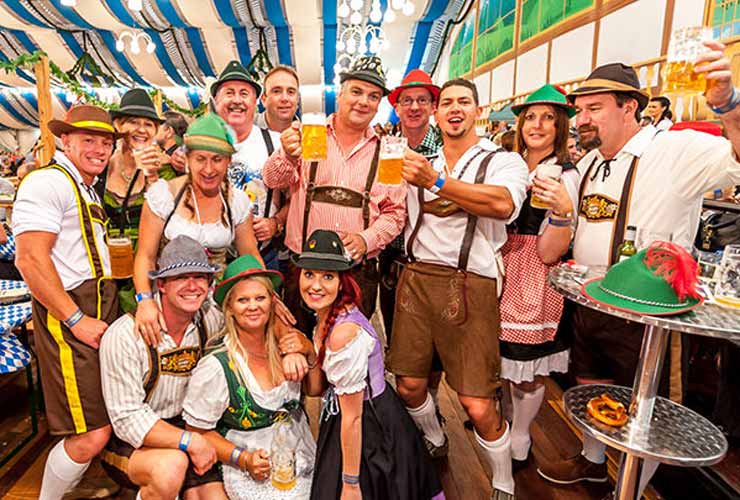 Outside the beer tents, you’ll find a carnival atmosphere with games, rides, and even haunted houses.

Oktoberfest is so much more fun when you’re wearing lederhosen! Traditional lederhosen are made of goatskin, or deerskin if you want to impress. The best are hand-made with old-style antler buttons. Bavarian ladies wear curve-flattering dirndls (pronounced dern-DULL) comprising a white blouse, a skirt, and an apron. Select your genuine heritage-style Oktoberfest gear from Stockerpoint’s top-of-the-line range, still traditionally made with techniques like hand buffing and tanning. Krüger also offers traditional and modern styles for men, women, and children. 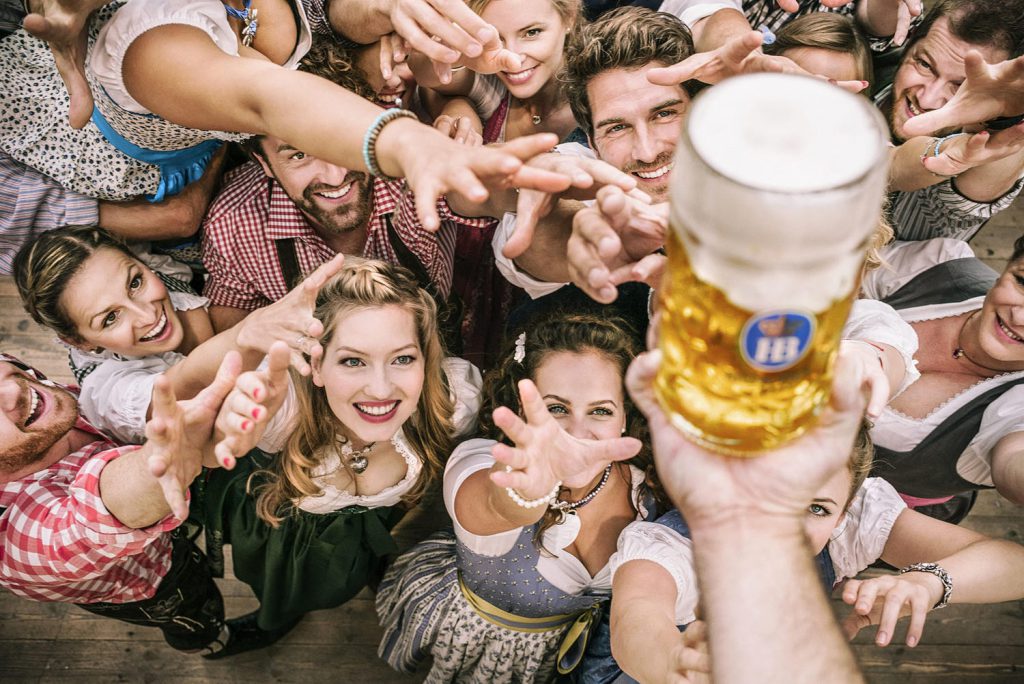 When the party mood takes you, remember it’s ok to dance on the benches, but not on the tables.