In the beautiful Italian city of Verona sits a stunning architectural achievement in the form of an amphitheater almost 2000 years old.  With the same structure as the Colosseum in Rome one would think it was inspired by the capital but in fact it predates the larger Roman counterpart by about 50 years.  The Arena Di Verona is also in considerably better condition than the Colosseum.  Still in use, it is home to one of the largest opera festivals in the world since 1936 while the first opera performance there took place in 1913 to celebrate the 100th anniversary of Giuseppi Verdi’s birth with his prominent work, Aida. 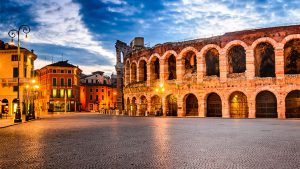 The Arena di Verona Opera Festival runs for almost 3 months in the summer with a rotation of 4 shows.  In any theatre these are all amazing spectacles but to take in a show in a living piece of history is an extraordinary experience.  The massive set pieces and changes that take place, the world class performers and magnificent acoustics make for a performance one will not forget.  This year showcased the famous works: La Traviata, Carmen, Aida and Tosca. 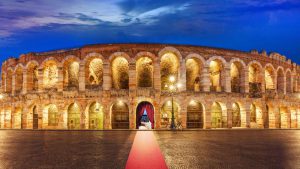 Premium tickets provide padded chairs on the lower levels while the cheaper seats give the authentic ancient Roman experience of sitting on the stone steps high up with first come first serve seating and no particular limit on how many people sit in a certain section.  Needless to say, this experience is better in theory than reality.  Typically 15,000 people is the limit for performances and each year over 500,000 people come to enjoy the opera festival. 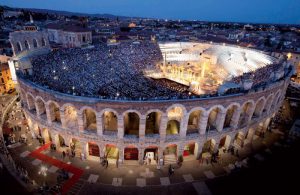 Even for those not enthusiastic about opera, it is well worth enjoying this operatic performance since it is impressive in so many ways.  That being said, the Arena di Verona has also hosted concerts from relatively more recent famous musicians including: Pink Floyd, The Who, Sting, Leonard Cohen, and Whitney Houston. 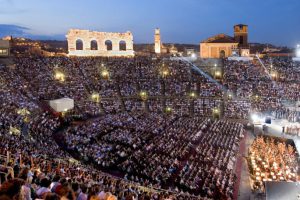