Beyond the Realm of Architecture

There are buildings that house art. Grand, staunch, impenetrable safe houses of our cultural heritage. Then there is architecture, a fusion of necessity, a shelter from the elements, but also an art, that in and of itself inspires, and is a response to culture, time and space. 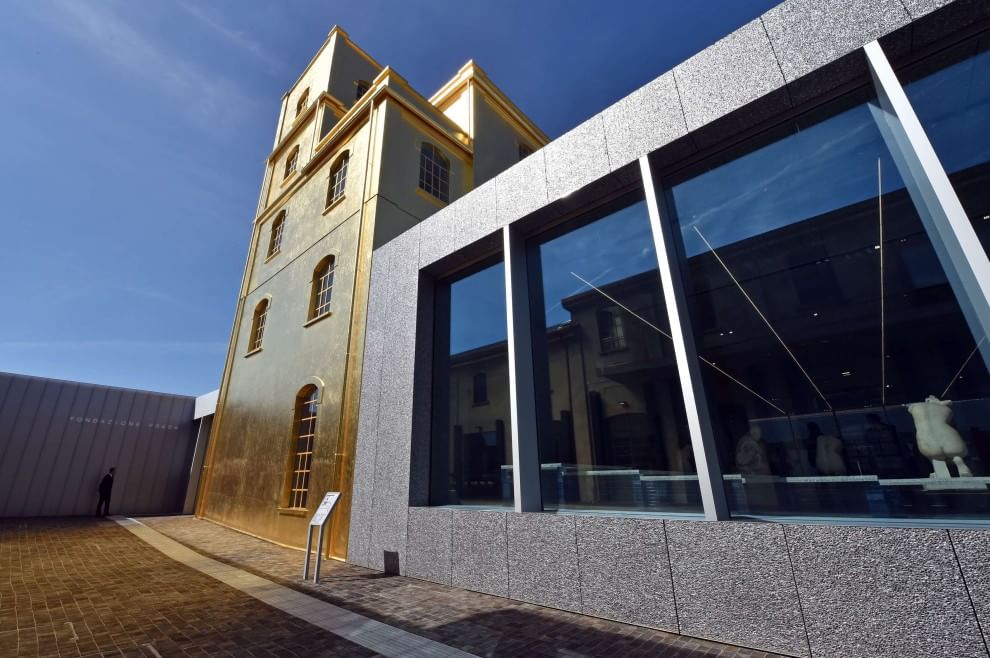 Conceived by the architecture firm OMA, led by Rem Koolhaas, the Fondazione Prada combined seven existing buildings with three new structures: the Podium, Cinema and Torre. Koolhaas is quick to point out that it is not a preservation site of the original 1916 distillery nor is it new architecture. Located in Largo Isarco in the south of Milan, it is a combination of spaces that serve the purpose of art display, preservation and inspiration.

The 205,000-square-foot area combines post-industrial and modern spaces, both intimate and expansive. The Deposito, which houses the Fondazione’s collection, is intriguingly arranged, so states Koolhaas, as “…a hybrid of strict storage and partial display, creating ‘chambers’ where work such as a fleet of artists’ cars can be unpacked or half opened to the public.”

The Cistern, a preexisting building made up of three adjacent vertical structures that were once cisterns for distillates, is divided into three rooms with three interior ‘pulpits’ connected to an exterior balcony. According to Koolhaas, “Its configuration suggests a precise industrial need that now reads as a quasi-religious environment.” The Cinema has bi-fold doors and can be instantly connected to the courtyard. Inside, the raked seating can be converted into a flat floor, allowing the space to be used for staging outdoor events or as additional covered gallery space. The Haunted House, a preexisting building with its exterior covered entirely in gold leaf offers a ‘domestic’ setting for specific works, and adjacent, the Podium forms the center of the museum compound, made up of a fully glazed, column-free podium on the ground floor, and clad in aluminum foam with a bubbled pattern, is another gallery space on top. Both galleries provide large, multi-purpose areas inviting a superlative showcase for temporary exhibitions and events.