Meier received his architectural training at Cornell University and established his own office in New York City in 1963. He has been awarded the highest honors in the field including the Pritzker Prize for Architecture, the Gold Medals of the American Institute of Architects and the Royal Institute of British Architects as well as the Praemium Imperiale from the Japan Art Association.

For over five decades, Richard Meier & Partners has been selected to create important works in both the public and private spheres. Meier’s thoughtful, elegant contemporary architecture exceeds expectations for beauty and form while fulfilling complex operational needs.

The work of Richard Meier is instantly recognizable and internationally respected. Meier’s projects have received 30 National Honor Awards from the American Institute of Architects and over 50 from the New York AIA and other regional chapters.

Meier is known for resisting trend-based design, instead developing his own design philosophy rooted in rationalism. He is noted for his use of ‘white’, the absence of color, an intrinsic characteristic of his works. His philosophy is grounded in using light as the main material to give form to his orderly, sculptural, and linear architecture.

“The way that light traverses and cuts through buildings is the interrogative and the principal magic from whence Meier’s projects are born,” states Frank Stella.

Profoundly influenced by Le Corbusier, Richard Meier refines his principles of geometrical progression by playing with structure, space and elements of formal precision. His designs can be seen as Neo-Le Corbusier, referencing the famous French architect’s early phase in particular. Meier has also cited Frank Lloyd Wright as a major influence.

He is everywhere: e Getty Center in Los Angeles, The Neugebauer House in Naples, Florida, the Jubilee Church in Rome, the iconic Charles and Perry Street Towers in New York City, the High Museum in Atlanta and the Arp Museum project in Rolandseck, Germany which traverses a mountain. They are recognizable geometrical and spatial compositions that reflect the continuous search and analysis of concepts perfected over more than half a century of constant work in the field of architecture and design by this American abstract artist and architect.

“I believe that architecture has the power to inspire, to elevate the spirit, to feed both the mind and the body.It is for me the most public of the arts.”
– FRANK GEHRY 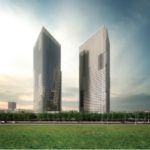 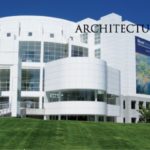 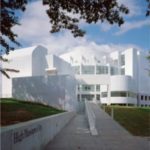 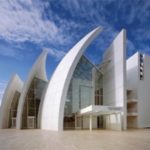