The oculus a Genuine People’s cathedral

The impact of the space and its crowning oculus is undeniable. In fact the Oculus is the name given to the central space in Calatrava’s sprawling complex in New York City – the station house which opened in early March of this year, the official World Trade Center Transportation Hub.

Considered the most expensive train station in the world, it was built on the site of the World Trade Center destroyed 15 years ago in the 9/11 attacks. It is the exhilarating nave of a genuine people’s cathedral destined to be a prime “selfie” location for years to come.

The Oculus is a room that soars under a great arc of glass. Calatrava has put together a space that is uplifting, full of light and movement, and capable of inspiring hope which has been in particularly short supply at “Ground Zero”.

The Oculus cost billions of dollars of public money and yet is a shrine to the commercial marketplace. is however doesn’t lessen the impact of the architecture nor negate the fact that this is the first time in fifty years that New York City has built a truly sumptuous interior space for the bene t of the public.

Standing inside the Oculus and gazing up is jaw-dropping. Curved, steel-ribbed walls rise up 160 feet like a pair of immense ethereal wings toward a ribbon of glass that is the giant hall’s skylight. The sun pours through the skylight, whose glass panes may be opened and closed. Using one of the architect’s favorite words, the new spaces are indeed “monumental” – open and airy, a radical transformation of space in an area of the city that can often feel closed-in and tightly confined.

When asked about his inspiration, Calatrava cites famous structures from antiquity, including the Parthenon, the Pantheon, the Hagia Sofia and the Alhambra in his native Spain, as well as American landmarks like the Golden Gate Bridge and Grand Central Terminal.

Calatrava has defined his style as bridging the division between structural engineering and architecture. In his projects, he claims to continue a tradition of Spanish modernist engineering that included Antonio Gaudi? with a personal style that derives from numerous studies of the human body and the natural world.

“I have tried to get close to the frontier between architecture and sculpture and to understand architecture as an art.”
– Santiago Calatrava 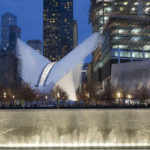 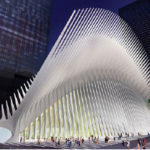 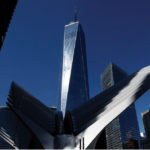