As an example of the aesthetic achievements of our time, the Museo Internacional del Barroco, or simply the MIB, in the City of Puebla, Mexico has been created referencing the most up-to-date exhibition design by the firm of Japanese architect Toyo Ito, the Pritzker Architecture Prize Laureate of 2013.
In the words of the jury that presided over this international distinction, equivalent to the Nobel Prize of architecture, Toyo Ito is:

…a creator of timeless buildings, who at the same time boldly charts new paths. His architecture projects an air of optimism, lightness and joy, and is infused with both a sense of uniqueness and universality…

A walkway is suspended over water that extends into the park where it is located. From the outside, the reflection of the building in the surrounding water is unquestionably dramatic – a space where water, sky, light and structure meet. The Pritzker jury explains his style as a combination of “conceptual innovation with superbly executed buildings”, noting his work is distinguished for “spiritual dimension and for the poetics that transcend his works.”

The museum’s facade displays nighttime projections of images related to current exhibitions, which also illuminate the museum and make it stand out from a distance. In the extensive patio, dominating the space, Ito placed a large fountain designed as a swirling water motif. Moving water is a recurring theme of the Baroque era. 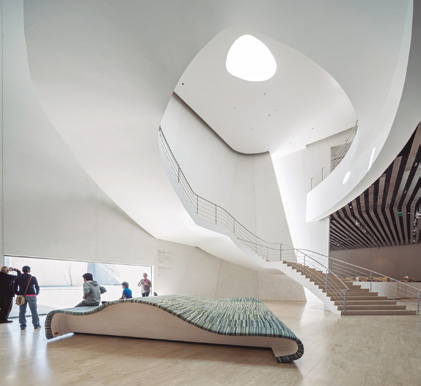 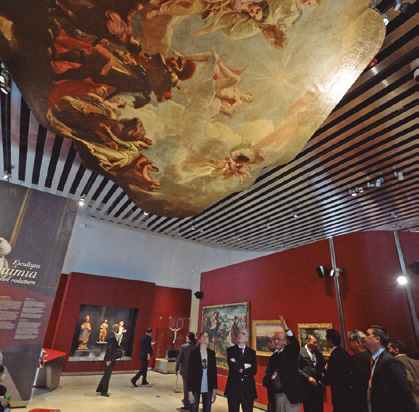 The building has two levels: the lower floor is dedicated mainly to exhibits, while the second is for research, education, and administration. The atrium features a curvy staircase and benches designed by Kazuko Fujie Atelier with local artisans.

In time, the MIB will become a cultural meeting center, not only in Mexico but internationally. People will come from all over the world to gather there and exchange thoughts and reflections. This cultural institution will become a timeless point of attraction to the world and a source of pride and joy for the people of Puebla.

“Architecture is nothing more than a tree, it should grow in harmony with its surroundings.”-Toyo Ito