Contemporary Mexican fashion designer Richard Seco’s REAL collection seeks to captivate and seduce the public while highlighting his native country. Universal in appeal, he shares, “… it is an expression of Mexico’s proud history through simple forms, unique details, textures and shapes resulting in a personal style where attitude is larger than anything else. This is the Mexico I want to share with you.”

The Ricardo Seco clothing brand is culture- urban-chic. Seco’s goal in menswear is that the clothes not only look good but also make the wearer feel powerful. Richard Seco designs are easily recognized for their uniqueness, cleanliness of fabric detail, patterns and sophisticated fit.

This particular collection is for the urban man combining different textures with fabrics such as leather, silk, cotton, wool and neoprene, in black and white, with a distinct “pop of color” thrown in.

Seco was a frustrated self-taught designer while he was in business unrelated to fashion for twelve years. He finally risked everything for what he truly loved – fashion. After studying design at the Marangoni Institute in Milan and Paris, he made his debut in New York in 2012; the only Mexican menswear designer to take part in New York Fashion Week. Subsequently he took his collections to Mexico City’s Rufino Tamayo Museum and on to Colombia and Miami.

Seco has been well received by fashion critics and publications alike worldwide and is considered to be one of Mexico’s most influential designers. He has showrooms in New York and the chic Condesa District of Mexico City. 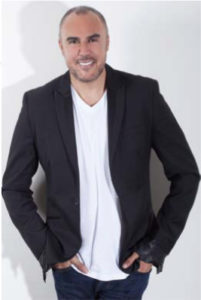