A man with a mission, the former pre-teen heartthrob is out to save the world while picking up an Oscar along the way. The pinnacle of a long and successful career, Leonardo DiCaprio was recently granted the Oscar for Best Actor in his leading role in the film The Revenant, directed and co-written by renowned Mexican filmmaker and now third-time Oscar-winner Alejandro G. Iñárritu. The film was inspired by a true story and graphically depicts the journey of one man, Leonardo DiCaprio as the character Hugh Glass, in a fight for his life in the American wilderness. According to Variety magazine, DiCaprio in his research for this role, “…ate raw bison liver, learned how to shoot a musket and speak two Native American languages (Pawnee and Arikara), studied with a doctor who specialized in ancient healing techniques and was violently tossed around by a stunt rig for the film’s harrowing bear-mauling sequence.”

The Oscar award only highlights what we already knew about the actor, that he is a talented professional, dedicated to each project with a passion that is found in only true artists. A native of LA, DiCaprio got into the business at the age of 12, when it was clear to him even

then what he wanted to do with his life.

He acknowledges that he owes a great deal to his mother, Irmelin Indenbirken, who accompanied DiCaprio to the recent Oscar ceremony. He has noted that it was she who took him to auditions after school and without her support he would never have made it to where he is now.

DiCaprio started out in TV commercials and educational programs. His first big role was with the TV show Growing Pains. He made his movie debut in 1991 in Critters 3. He started to get noticed in the film This Boy’s Life and then, in 1993, he earned an Academy

Award nomination for best supporting actor as Johnny Depp’s mentally handicapped brother, in What’s Eating Gilbert Grape. New York Times critic Janet Maslin wrote, “…the film’s real show-stopping turn comes from Mr. DiCaprio, who makes Arnie’s many tics so startling and vivid that at first he is difficult to watch. The performance has a sharp, desperate intensity from

DiCaprio’s intensity is surely the key factor to his success. He fleshes out each role, suspending the viewer’s reality completely with the fictional character he is portraying and it comes from the love he has for his profession. He chooses roles that require complete immersion where he is often the conflicted hero. “I just really love doing what I do. I know every career is fleeting and there will be time periods when I don’t get the opportunities that I’m getting right now, so I am taking advantage of them.”

Since What’s Eating Gilbert Grape, he has received nominations for Oscars, and many other awards for both his producer and acting work in films such as: The Basketball Diaries, Romeo and Juliet, Titanic, The Man in the Iron Mask, and The Aviator just to name a few. The Aviator which he produced and acted in, as well as his role in The Wolf of Wall Street, DiCaprio’s fifth collaboration with Director Martin Scorsese, and The Revenant earned him Golden Globe Awards. It is no surprise to most that this time around he got the coveted film industry prize. The Revenant and its powerful team also won Oscars for Best Director, and Best Cinematography. 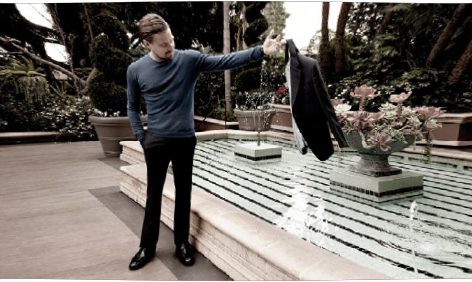 DiCaprio’s production company is called Appian Way. Its first production was The Assassination of Richard Nixon and then The Aviator. Later with Appian Way he wrote, produced and narrated The 11th Hour, a documentary about the environment, a topic that is close to the actor’s heart. Other Appian Way productions include Shutter Island, The Ides of March, and Red Riding Hood to name a few. They have recently acquired the rights to make a movie about the Volkswagen emissions scandal.

DiCaprio is single, and has an apartment in the TriBeCa neighborhood in New York. He bought an island in Belize where he wants to build an eco-friendly resort and owns an apartment in Riverhouse, an eco-friendly building overlooking the Hudson River in Manhattan, as well as mansions in Hollywood Hills, and Palm Springs and a Malibu beach house. The actor, producer and activist, is a very busy man and devoted to saving the planet and to perfecting his art. He is a self-taught 41-year-old, currently number 89 on the list of Top 100 Celebrity Earners, ringing off at $29 million in 2015. Celebrity Net Worth sets DiCaprio’s net value at $245 million. He earned a cool $20 million for The Revenant and $55 million for the now classic film, Titanic.

DiCaprio sees a conflicted world and he is making heroic efforts to change what he sees as planetary suicide, largely based on the overexploitation of the world’s resources without regard to the destruction it leaves behind. The Revenant explores, within its plot context, a subject that is one of the actor’s passions, the wilderness. DiCaprio took the opportunity of accepting his Oscar for the movie to plead for planetary health, “Our planet cannot be saved unless we leave fossil fuels in the ground where they belong.”

He has created The Leonardo DiCaprio Foundation (LDF) which has distributed over $30 million since 2010 to fund 78 high-impact projects in more than 44 countries across South-East Asia, Central Asia, Africa, North, Central and South America, the Eastern Pacific, the Arctic, Antarctica, the South Pacific, and the Indian Ocean. His organization is implementing innovative and environmental projects that have direct impact around the globe. Leonardo’s website and social media platforms are also dedicated to inspiring the public to take action on key environmental issues and has over 25 million followers. He states, “Raising awareness on the most pressing environmental issues of our time is more important than ever.”

He states, “Given this limited support, it’s no surprise that roughly only two percent of our oceans and twelve percent of our lands are formally protected from invasive human activity like commercial fishing, agriculture, logging, and energy extraction. He is working on changing that equation by speaking to and working with world leaders. He believes that the problem is urgent.

The LDF works in four key environmental areas. The first area is protecting endangered wildlife, such as sharks in California, tigers in Asia, elephants and gorillas in Africa. The second is saving the oceans. LDF’s partnerships, especially with international initiative Oceans 5, aim to safeguard endangered ocean habitats and species. The third, visualized somewhat in The Revenant is the preserving and restoring of the wilderness, providing formal protection from over exploitation of natural resources. The fourth area is empowering local communities and indigenous tribes with the tools and resources to defend their lands and cultures.

DiCaprio spoke at the Mayors’ summit in Paris, and the World Economic Forum in Switzerland, where he accepted a Davos award for his humanitarian work and pleaded for more business and world leaders to get on board the Divest-Invest agenda as did Bill Gates, Mark Zuckerberg and Jeff Bezos. They have pledged to build a zero emissions future divesting of fossil fuel holdings and replacing them with new investments in clean renewable energy. DiCaprio asked world leaders “… to join them, because if we all do our part and act with bold leadership we can achieve major meaningful progress. It is not only an inevitable transition; it is also imperative for the future of our planet.”

He himself drives a 2012 Fisker Karma, a hybrid electric super-fast sports-car with solar panels as a roof, so he is not just talking the talk. He truly laments,

“We are the most powerful country in the world and we haven’t made a tiptoe towards renewable technologies. We should be the ones paving the way, the ones other countries look up to. It makes me extremely sad.”

Passionate, successful and a planetary crusader, seeking to save what we haven’t yet destroyed, the LA born and bred actor maintains an active agenda. The Oscar for best leading actor, long his due, is a well-deserved reward for this conscientious professional that we have grown to love and adore. The key to his success? He has always believed if you can do what you do best and be happy, you’re further along in life than most people and to succeed in showbiz, he says, he resorts to guidance from his inner child:

“I’ve managed to keep a clear head and remain sane in this business because I remain a kid off-camera.”